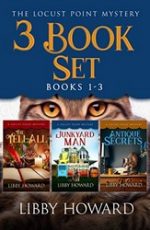 Life at sixty isn’t quite what Kay Carrera expected. She’s working as a skip-tracer for a PI who is desperate to land his own reality TV show. She has a new roommate who arrived with more than the usual amount of baggage. And her attempts at knitting are less than stellar – way less than stellar. Worse, the cataract surgery that restored her sight has also delivered an unexpected and disturbing side-effect.

Kay sees ghosts. And when the dead turn to her for help, she just can’t say no. 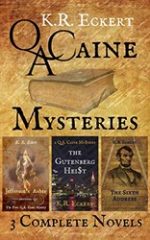 Here in the first three of Caine’s adventures, you’ll find he’s all of these things and more…

First in Jefferson’s Ashes, you’ll find Caine, the book dealer, buying a valuable and rare Jefferson Bible. But when the young man who sold it to him is found dead a few blocks from Caine’s shop, the only way he can stay off the list of suspects is to solve the case himself.

Then in The Gutenberg Heist you’ll see how Caine the criminal plots to steal a Gutenberg Bible worth forty million dollars from the billionaire who killed to get it, and who, Caine knows, will kill again to keep it.

Finally, in The Sixth Address, the novel where Caine was introduced in a supporting role, he joins with The History Hunter, Paul Davenport, in a race across the United States to find an unknown copy of Abraham’s Lincoln’s Gettysburg Address before Caine’s most dangerous enemy gets it first. 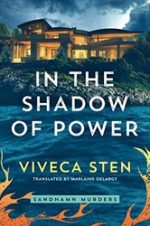 In the Shadow of Power
by Viveca Sten, Marlaine Delargy
Rating: 4.4 #ad

What do the new arrivals on Sandhamn Island have to fear? Their own secrets – in this gripping novel of suspense by the bestselling author of In the Heat of the Moment.

The new summer house on Sandhamn Island is an architectural dream for its owner, Carsten Jonsson. It’s a nightmare for the locals. The venture capitalist has flouted local traditions, property lines, and the natural beauty of the coastline. He’s also too wealthy and arrogant to heed the anonymous warnings to leave. The threats escalate when his guest lodge is burned to the ground and an unidentifiable corpse is found in the charred ruins. 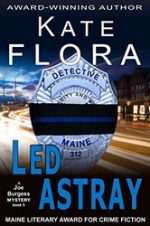 Responding to a “shots fired” call at an abandoned warehouse, Detective Joe Burgess realizes his worst nightmare when he finds one rookie officer shot dead and two other officers–one his lieutenant–gravely wounded.

With two brother officers near death, Burgess must race the clock to find and arrest the one person angry enough to seek revenge against the Portland police, before the rookie officer’s funeral turns into a killing field.

Check out:
(A Joe Burgess Mysteries) 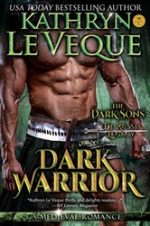 1518 A.D. – As a decorated knight for Henry VIII, Cort is charged with a special mission – to seduce an Irish rebel and learn her secrets. Dera MacRohan is no ordinary Irish warrior lass.

Born from the ancient MacRohan warrior bloodlines, Dera is from a long line of warrior women. She deeply resents the English and their conquest, but she also understands the subtleties of tactics and strategy. Sometimes it is easier to catch flies with honey. Or kill an Englishman with kindness. 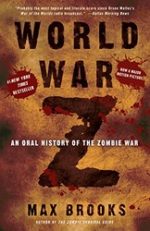 The Zombie War came unthinkably close to eradicating humanity. Max Brooks, driven by the urgency of preserving the acid-etched first-hand experiences of the survivors, traveled across the United States of America and throughout the world, from decimated cities that once teemed with upwards of thirty million souls to the most remote and inhospitable areas of the planet. He recorded the testimony of men, women, and sometimes children who came face-to-face with the living, or at least the undead, hell of that dreadful time. World War Z is the result. 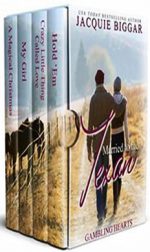 Sweet, sexy romance. The perfect reading deal for your Kindle! Grab a cool drink and curl up for an unforgettable boxed set of romance best sellers. Each book is a standalone contemporary story of love, honor, duty, and family dilemmas.